Every con has a way to see through it if you look hard enough to find the truth. Recently a man was arrested for running a Super Bowl Pool scam. He claimed he was kidnapped after police discovered him tied and taped up in a car. What was the dead giveaway? He claimed to have been tied up and driven around for 3 days. The problem is, the police noticed that he had just shaven earlier in the day, and didn’t have the hair growth associated with 3 days of kidnapping. Skepticism is what solves 100% of scams, if you aren’t skeptical, you are the one that gets scammed.

The first clue to the “Hockey Stick” scam is that the chart “dog-legs” twice, both corresponding with changes in the data construction. The first is in 1902 when thermometer data is introduced and the above chart turns from blue to red, and then in 1980 when proxy data is dropped altogether.

There are numerous problems with this Temperature Chart.

The Trend in CO2 has been a  gradual increase since the mid-1700s. There are no dog-legs in the rate of CO2 increase in the atmosphere post-1750.

Using direct measurements of CO2, and not inaccurate ice-core proxies, the smooth trend in CO2 is much more pronounced. There is no dog-leg in 1980. 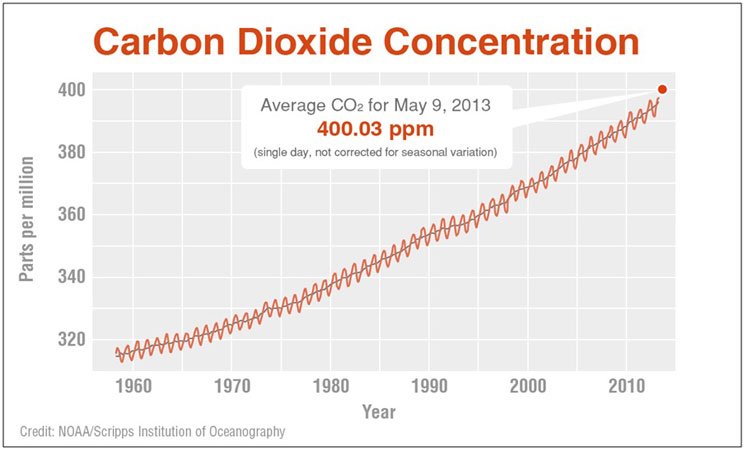 The problem the Climate Alarmist’s scam faces is that the W/M^2 absorbed by CO2 isn’t linear like the CO2 trend, it shows a logarithmic DECAY. Unlike the “Hockey Stick” that shows linear warming with the linear CO2 increase, the marginal W/M^2 actually DECREASES with additional CO2. From the following chart, CO2 added 29.8 W/M^2 to the atmospheric energy budget when it increased from 0.00 ppm to the pre-industrial 300 ppm maximum level. The post-industrial CO2 increase from 300 to 400 ppm added an additional 1.38 W/M^2, and doubling CO2 from 400 ppm to 800 ppm will add an additional 3.33 W/M^2. To put those numbers in perspective, a simple cumulus cloud layer can “trap” 28.7 W/M^2 without any catastrophic consequences to warming.

Most, if not all of the warming shown in the “Hockey Stick” is mostly monkey business, manufactured through manipulating proxy data to “hide declines” and exaggerate warming. How do I know this other than from the leaked Climategate Emails? Simple, the physics of the CO2 molecule are constant. You don’t need complicated proxy reconstructions from all over the world, you simply need one data source that is measured in a consistent manner. CO2 evenly blends throughout the atmosphere, so the W/M^2 of CO2 is constant no matter where you are on the globe. Because of this even blending and constant radiation regardless of location, one location is enough to measure the impact of CO2 on temperatures. The longest continual instrumental temperature record, ie no proxies, is Central England. That record starts in the mid-1600s and shows no material warming with the increase in CO2. Nada. Current temperatures are below the level reached in 1687, 1729, 1785, 1827, etc etc. It is important to remember that much of that data set was created during the Little Ice Age.

Notice how the tail end temperatures seem to jump after attention was paid to global warming. CO2 didn’t suddenly spike up in 1990, but the temperatures did. Also, temperatures FELL between 1940 and 1995 during a period when CO2 increased dramatically. Lastly, if the regression line had started in 1729 instead of the bottom of the Little Ice Age in 1659, the regression would be either flat or downward sloping. Another interesting source on this topic.

Michael Mann is one of the “scientists” that President Obama was gullible enough to believe. The fact that 97% of climate “scientists” rely on such laughably pathetic climate research pretty much proves Climate Scientists are mostly either con artists or fools…or both.

How did science become such a haven for con men? Pay them to corrupt science for the “public good.”

Here is the real history of temperature that covers the entire Holocene. It should be obvious why Michael Mann only modeled the last 1,000 years. As a reminder, there were no SUVs or Coal Burning Powerplants for most of the Holocene.